It’s fun flipping and reading through an older Muskoka newspaper. The ads tell as much of a story as the articles. The Capital Theatre in Huntsville announced the opening of the 007 Movie Moonraker, staring Roger Moore, the 1979 model of the Johnson fleet of outboards, from 25HP to 235HP, the cost of a round of golf at $8.00 were some of reminders of how much has changed.  It also reminds us of a few businesses and pieces of history that have survived and continue today. 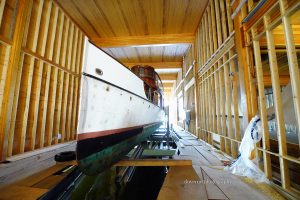 The Muskoka Album of Lakes Steamers was a series published in the summer issues of the Muskoka Sun of 1979. While the Wenonah was launched in 1866, the next steamer to be launched was the Waubamik. She was intended to serve Lake Rosseau, but wasn’t built locally. She was brought from Lake Couchiching on sled runners during the winter to Lake Muskoka and then steamed up to Port Carling in the spring, where she was moved up the rapids, a series of coffer dams being built behind the ship, reaching Lake Rosseau. In 1870, when the cut was made at Port Sandfield, the Waubamik could steam into Lake Joseph.

After some years moving passengers, her duties shifted to being a tug. Eventually, she was moved over to Lake of Bays in 1878. The Waubamik is just the second of many commercial steamers to eventually operate on Lake Muskoka. The Wanda III, a narrow and fast privately operated steamer on Lake Rosseau, is soon to be “steaming” again, but powered by electric engines.

← Treasure On the Bottom of the Lakes: Wenonah P. 2
Tide of Development →