There is Always a Story

MAB, one of the boats on display at the Muskoka Discovery Centre this summer is one of four sisters built at the same time by Minett-Sheilds of Bracebridge in the early 1930’s. It was a difficult time for most of the boat builder, following the Great Depression. Not only was money scarce, but competition had increased with the addition of new builders. The 1934, twin cockpit, sport runabouts were longer than their sportier amateur race boats, while still retaining much of the feel and look.

MAB, originally named Radio II, is a 1934 Minett-Shields and one of four similar boats, was originally sold to Ma Belle Beaty, the aunt of Bryson Shields, at a time when the company was in financial difficulty. She was sold to David Pardoe in 1960 and he renamed her MAB, in reference to Fairy Island, where she was located and Edmund Spenser’s poem, The Faerie Queen. David Pardoe was in his 90s when she was sold to Alan Cranfield, who had her restored to a very sporting form. He retained the name MAB in honour of her time with David Pardoe. 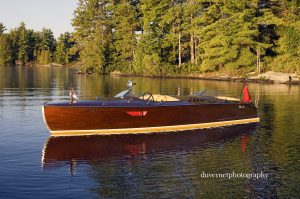 I remember meeting David Pardoe when photographing Wood and Glory (copies available!) It was wonderful to meet him and to photograph a boat that had such a direct connection to Minett-Shields. She looks as spectacular today as when she was delivered, nearly 80 years ago. With bright yellow seats with matching water line, she captures the period essence with a bit of extra flair.