After decades in the USA, the SS Keewatin, a 350 foot passenger steamer, built and launched in Scotland in 1907, returned to Port McNicoll, Ontario last summer, from it’s “museum home” near Douglas, Michigan   No doubt the restorative work required on this massive vessel is underway. 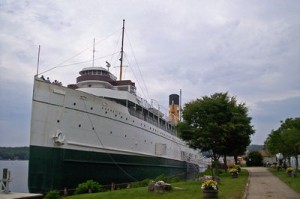 Steamboating colleagues:
Press releases this week confirm that Saugatuck, Michigan will lose the classic 350 Ft. SS KEEWATIN, built at Coban, Scotland on the River Clyde in 1906. Mr. Roland ‘R.J.’ Peterson, 85, owner of Tower Marina in nearly Douglas, MI purchased the classic Edwardian steamship in 1967 CANADIAN PACIFIC vessel to keep her from heading to the scrappers. Peterson cites his age and the vessel’s need for intensive repairs/renovations after 44 years in his care. ‘Skyline International Development Co.,’ a huge Toronto based operation in hotels, resorts, convention work plan to tow the vessel to Port McNicoll on the south end of Georgian Bay where she operated for some 60 years. The deal is to be signed this Thursday. Silting of present Lake Kalamazoo will require $1,000,000 in dredging to move the ship. Though lightened in draft with no fuel [coal in her day], water, cargo, KEEWATIN will need a 12 ft. channel depth.
(The Keewatin arrived in Port McNicoll in June of 2012.  The photo below shows her on the move to her Georgian Bay, Ontario home. Stay tuned for more photos this spring/summer, as work continues on this historic vessel.) 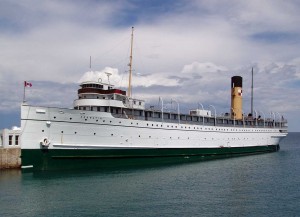 Enjoy the video of SS Keewatin.