Treasure On the Bottom of the Lakes: Wenonah P. 2

Who knows what lies on the bottom of the Lakes of Muskoka? Old timber logs fallen off of the first logging boats, speed boats that suffered a crash, Ditchburn wooden raceboats or maybe a steamer or two? 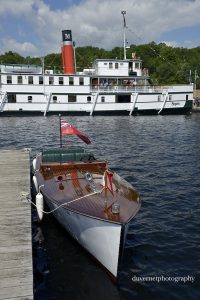 There are stories of discoveries and wrecks in the depths of Muskoka. Wa Chee Wee was one such recovery. The remains of the Waome, also known as the Mink, is a popular destination for divers. Her wreck is located in 50’ of water near Keewaydin Island. She was caught in a severe storm, broadsided on October 6, 1934 and sunk. Of the seven people on board at the time, four were able to swim to safety and three were lost. 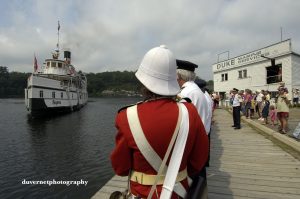 The Wenonah, the first steamer to be launched in Muskoka at Gravenhurst on August 8,  1866 may have been one of the first and most historic boats to have been scuttled. The side-wheeling steamer, whose name meant “first born”, continued in the service of Navigation Company until 1886, when she was retired. Her engines were removed and she was moored at Cinderwood Island, Lake Muskoka. She was used as a summer residence for Mr. Proctor of Beaverton, who was owner of the island. After a year or two of this use, she was towed out into the lake and sunk. I wonder if anything of her hull and history would have survived in the depths in the 130 years or so since being laid to rest?