The Duke Playmate is a common sight throughout Muskoka, as are a variety of other SeaBird, Duke and Greavette utility style boats. Whether they have centre drive, like the earlier Dukes, or forward drive with the engine in the middle, a standard layout is walk-around and curve glass windscreen fitted into a chrome or wooden frame. 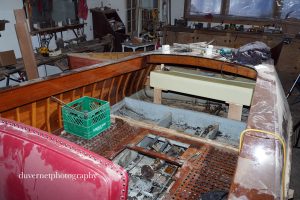 Less common from Duke Boats were longer launches, especially those well over 20’. Stan Hunter is currently restoring one of the longer varieties. In addition to the length and size, this boat has little design features that were a bit out of the norm for Duke boats. This big Duke was built in 1951, Stan believes, and she is 24’ long. She was powered by a big six-cylinder, Comet Buchanan model engine. This is a substantial engine according to Stan, that is capable of pushing an even bigger boat with ease. Stan explained that the owner of this boat wishes to replace the big straight six engine with a smaller, quieter Buchannan. 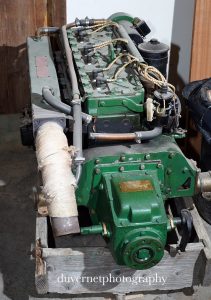 Beyond the engine, explained Stan, the boat also has other features that are unusual for Duke. The windscreen frame is square at the bottom, rather than fitting a curved piece of glass, and the floor uses grating rather than the typical linoleum flooring. Some parts of the floor are solid and Stan is replacing that with the grating, as per the owner’s wishes. Stan also pointed out that the gauges will be corrected to a period and model appropriate style.

← Wear and Tear on a Wooden Boat
Brand New Rowboat →