The Minett-Shields sport runabouts are the casual water hot rods of the 1930s. The inset riding lights just ahead of either side of the cockpit are a quick identifier as to the manufacturer of the boat.

John Hacker designed these short sport boats; and Altair was built for John Peck’s father’s 18th birthday in 1933. She is perhaps the prototype to the sport runabouts that followed, such as Shadow, built for by Chas Wheaton in 1934. 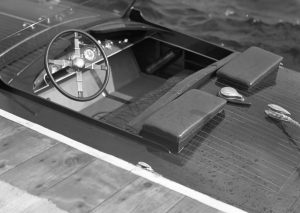 John Peck told me some of the story behind her power and performance.  Altair’s current engine is a Ford Interceptor 289 cu.-in.-V-8, which develops 190 HP. When she was new she had some smaller engine, which appears in some of Cameron’s archive photos. The Ford engine came from one of their other boats, which was repowered. 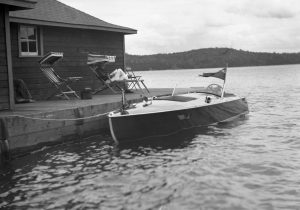 John explains that Cameron Peck took the Ford V-8 from Cetus and dropped it into Altair. Since the engine had been used with a V-drive, its rotation was the reverse of the usual, causing Altair to pull to starboard in reverse – not the usual pull-to-port for an inboard. “In 1968, when my father sent Altair to be restored and a new engine (the Interceptor) to be installed, he ordered the new engine with reverse rotation, so she still pulls to starboard in reverse.”

“A V-8 in an 18’ or 19’ sport runabout is a lot of power. I bet she got up to speed without much difficulty.” The sport runabouts of the 1930s would “compete” against each other over on Lake Rosseau and Muskoka. Naturally, competitors, such as Greavette, created their own versions of the sport runabout. This was likely also based on the Hacker formula.