Once you have heard the sound of a Dispro one cylinder, you’ll never forget it or confuse it with something else, similarly the Coventry Victor two cylinder. These are two examples of period engines that have established a unique character and identity. The engine is connected with the boat as much as the boat with the engine.

There are several other Muskoka built boats with a similarly strong connection to power. Buchannan built several models of engines that were installed in Muskoka boats. The Buchannan Midget was synonymous with boats built in Port Carling, especially through the 1930s, such as the Duke Playmate and early SeaBirds. At around 25 HP, it was a good match for these simple utility boats. 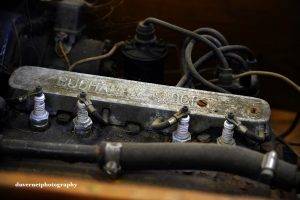 As the boats grew in size, so did the need for power. We had a 1939 SeaBird and a 1954 SeaBird, both with Buchannan engines. The newer one was rated around 65HP and it could just barely get the boat up on to a semi-plane. Paul Gockel describes the Midget as a very robust engine that stands up very well to use. 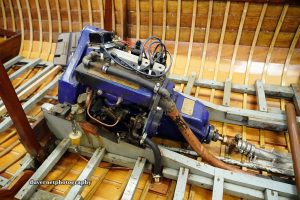 The Buchannans in our SeaBirds, I remember as being pretty reliable. Buchannan motors was located in Orillia. The Buchannan Meteor was built during the early 1950s and was apparently based on the block of a Hercules QXC, based out of Ohio.  In any case, the sound of these engines at speed is as unique as the boats they are in.

For a sense of what some can sound like, here is a link to a short YouTube video. https://youtu.be/UIKYUIt16bA