It may not look like it from the outside, but the hull of Wanda III is made of iron, just like the Segwun. She was built by Polson Iron Works in 1915 for Margaret Eaton, the wife of Timothy Eaton, Canada’s department-store king.  Wanda III was the fastest boat on the Muskoka Lakes, despite her steam power. Mrs. Eaton had her built to be fast in order to go from the train in Gravenhurst to her Ravenscrag cottage in just two hours. From the side, at 94’, she looks long and graceful with sweeping lines. She is now a soon-to-be prime exhibit and tour boat at the Muskoka Steamships and Discovery Centre. 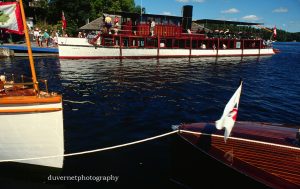 It wasn’t that long ago that she was still in use, powered by her steam engines. I can remember several celebratory events where she participated. Wanda II burned in a boathouse fire and her replacement had to be sure to never be bested in a race. I can’t imagine “racing” a steamship this long and narrow, especially if the course had any turns, since she is only 14’ wide. She is one of the few boats to survive with the triple expansion steam engine. She was capable of over 20mph. 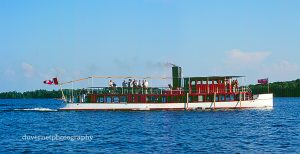 She has been declared by many as the finest yacht of her time. Randy Potts, who now has his own private tour boat business, has captained Wanda as well as the Segwun. Wanda III will make a striking statement, but smoke-free and in near silence, when she is finally launched and powered by electricity.