It’s been two years since boaters were able to enjoy each other’s enthusiasm for vintage boats. This spring will be the beginning of the renewal of that passion. The virtual spring tour is just around the corner and dates for the summer’s boat shows are being stamped on the calendar. 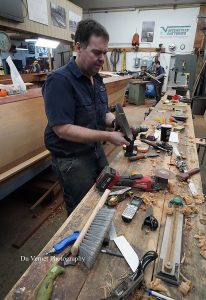 The virtual ACBS-Toronto spring tour is in development and likely set for the week after Easter. Video captured at the different boat shops within the umbrella of the ACBS-Toronto will be represented through the ACBS-Toronto website.  Muskoka boat builders will be especially well documented in the event. From Gravenhurst to Huntsville,  at least 7 boat shops will be filmed. Paul Brackley, Mike Windsor are the main shops in Gravenhurst. Mike Windsor has a particular touch with Dispros. Stan Hunter operates Milford Bay, located between Bracebridge and Port Carling. In Port Carling, he has experimented with electrifying different boats. James Osler and the Boat Builder shop (Rob Gerigs) are busy restoring and building wooden boats.  The big project in Rob Gerigs’ shop is the Nika. A nearly 37’ launch. She will be a spectacular boat to be launched this spring

There are a few other smaller shops around Muskoka that have been on tours in the past. Check out the ACBS-Toronto website to see the full variety.  An advantage to the virtual tour concept is that it will be accessible to viewers for an extended period and go into record for all time. If only we had such video of Duke’s and other shops from the past.