And Now For Something Completely Different!
NedCraft, a boat builder based out of Amsterdam, the Netherlands, has constructed a prototype aluminum hull boat. This design offers a low maintenance, presumably light-weight hull, but with some of the attractiveness of a classic runabout with its wooden decks. See the story and photos below. (Many thanks to Ingrid Foldes for recommending this story.) 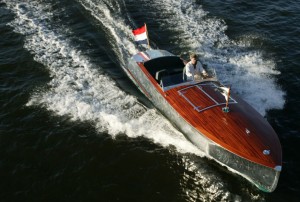 The general idea of this Runabout is to keep mainenance limited and make it look classic at the same time. That is why we chose to make the hull of high quality aluminium, combined with a mahogany deck and carpentry. Powered by a modern, economical engine, and with classical details like a big, car-like, steering wheel. Gear and throttle separated, positioned right under the steering wheel . This prototype has also a built-in toilet, and a 36 litre drawer-fridge.

The result is the “Silverback Runabout”, a sturdy classic and modern boat. We started building the first one on February 17. 2006 and it was launched for its first test-drive on the forth of November 2006. The test-drive taught us that the engine we put in ( 65 hp,4000 rpm, 1.9 litre Volkswagen diesel engine), was not powerful enough, though it reached a respectable 30 km/h. So in the winter of 2007 we put in a Volvo Penta D3 130 hp, also 4000 rpm, but with a 1.55 :1 gearbox. As a result we can reach a speed of 47 km/h (26 knots), which is a speed you expect from a model like this. Because this boat is a glider, unlike a normal speedboat, it has a fantastic rpm/speed curve, one straight up-going line. The boat stays perfectly horizontal. It also is well manouverable at low speed. 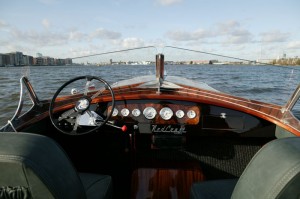 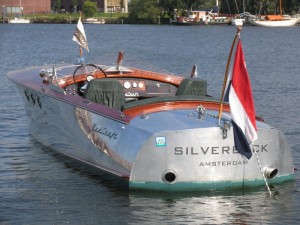 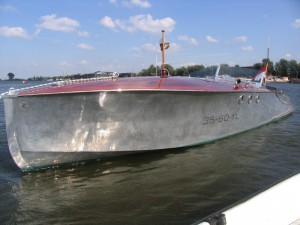