Henry Vokey, a master boat builder born in 1929, has been building wooden boats since age twelve.  He has constructed over 1000 vessels during his long career,  has been featured on several television documentaries and presented with the Order of Newfoundland.  In 2008, Henry decided to build “one last double masted schooner”, the Leah Caroline.  Construction began in 2009 and was finished recently. Congratulations to Henry for decades of dedication to a timeless and beautiful art.   Enjoy the launch of the Leah Caroline below. 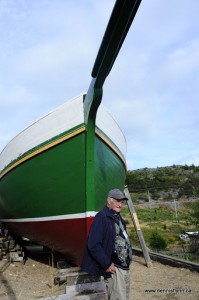 Building a dual mast 45 foot schooner is quite a feat. Building it in 3 years and starting it at the age of 80 years of age is
outstanding. Henry built this schooner for his own use; for getting his 13 children together back from all over Canada to return to tiny bay Newfoundland where his family originated from