Wide at the Beam

The Disappearing Propeller boat looks like a simple craft, pointy at both ends, with a rudder at one end with a flag pole. They look like an oversized rowboat, including a slot for oar locks and oars.

But there is so much more to a Dispro. I would venture to say that there is more detail in the design of a Dispro than a period equivalent long deck launch. First, the Dispro general design spanned about 40 years with several model design variations and engines over the years. It may be only when they are side by side that subtle differences become less subtle. 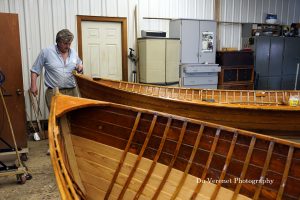 In Mike Windsor’s shop in Gravenhurst, two Dispros were in for restoration. One was a John Bull model. When compared to other models, the John Bull stands out immediately for its wider design. It looks positively pudgy side by side with other Dispros, at nearly 5’ wide in a boat that is a bit more than 16’ long. It would be a big boat to power with the single cylinder Waterman engine. This particular boat is powered by the bigger Coventry Victor engine.  In advertising material of the time, they are claimed to reach 9 mph which is hard to believe.

They have a very utilitarian look compared to the other boats, which look so much sleaker. According to record, over 3000 Dispros were built over the years. Only a fraction of this number are afloat today. Most are owned by members of the Dispro Owners Assocation, who keep the passion alive.