Since the great builders who blossomed in the teens and lasted until just after the Depression, many other builders have tried their hand at building “Classics”. The game plan has always been fairly simple. Sponsor a new design that incorporates elements of classic designs, seek out a few orders and build a few more for speculation.

Wooden boat building and design has always been a world of conservative perspectives, but one man tried to break the mold. Vic Carpenter believed in the epoxy construction process and he was also a master carpenter who enjoyed showing off his craft with a bit of flair. His personal sailboat was quite a specimen. Built for the waters of Georgian Bay, he hand-crafted the rigging as well as the hull. At 60’, the sailboat sported a 100’ mast. Her transom and decks were ornate demonstrations of inlay designs. She was called “Passing Wind”.  As I understand it, Vic wasn’t a perfect match for Muskoka at the time, some 40 years ago, when views were still pretty conservative.  Pistoff, built in 1980, is powered by two Chrysler Hemi engines. Needless to say, she is quite a spectacle. The entire boat is a tribute to his skills. Pistoff and Rascal are two boats that Carpenter built in the Gold Cup mode, following the dramatic lines of Baby Bootlegger. 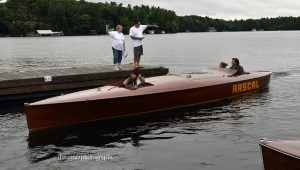 At one point working in the Muskoka tradition, with the builders of Muskoka, Carpenter chose to make a statement in wood. His designs have been classics in their own right.